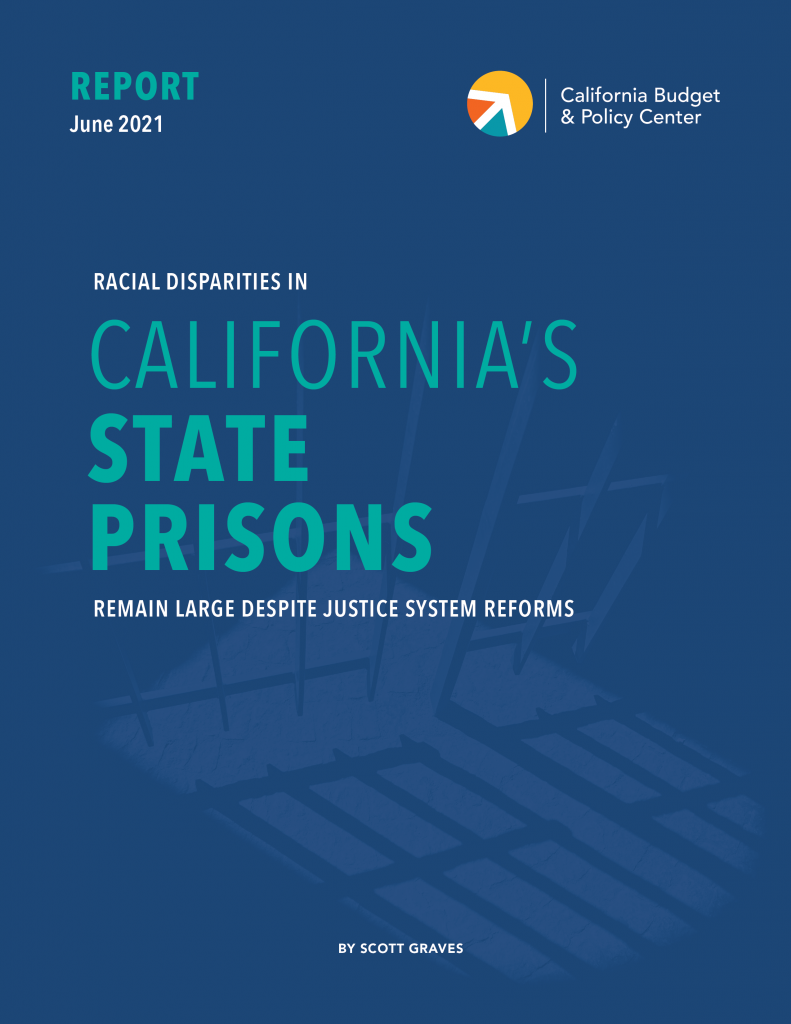 SACRAMENTO — A new report by the California Budget & Policy Center shows despite the significant decline in the state’s prison population, California is still supporting a massive prison system that incarcerates men and women of color at higher rates than white men and women. 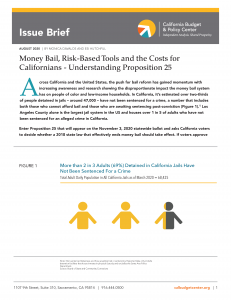 Over many years, California lawmakers and voters adopted a series of harsh, one-size-fits-all sentencing laws that prioritized punishment over rehabilitation, led to severe overcrowding in state prisons, and disproportionately impacted Black and Latinx Californians – consequences that many families still feel today. California began reconsidering its “tough on crime” approach a little over a decade ago as prison overcrowding reached crisis proportions and the state faced lawsuits filed on behalf of incarcerated adults. Ultimately, a federal court in 2009 ordered California to reduce overcrowding to no more than 137.5% of the prison system’s capacity – an order that remains in effect today.1

State-level reforms – enacted into law through voter approval of ballot propositions as well as through legislative action – have focused on reducing incarceration, promoting more effective pathways to rehabilitation, and addressing the disparate impacts of criminal justice policies on people of color, particularly Black and Latinx communities.2 With these reforms, both the prison population and crime rates are down substantially, showing that California’s efforts to reduce mass incarceration, while far from complete, are working.

1. The Number of Adults Incarcerated by the State Has Declined Substantially

Adults who are incarcerated by the state fall under the jurisdiction of the California Department of Corrections and Rehabilitation (CDCR). Most of these adults – more than 9 in 10 – are held in 34 state-owned prisons. The remaining men and women are housed in other locations throughout California, including in public and private facilities under contract with CDCR. (Until recently, thousands of state prisoners were housed in out-of-state facilities.) The number of adults incarcerated by the state exceeded 173,000 in 2007, when state prisons were crowded to roughly double their capacity. By June 2020 – following years of criminal justice reforms and, more recently, new policies adopted in response to the COVID-19 pandemic – the number of adults incarcerated had dropped by more than one-third, to 113,403.3 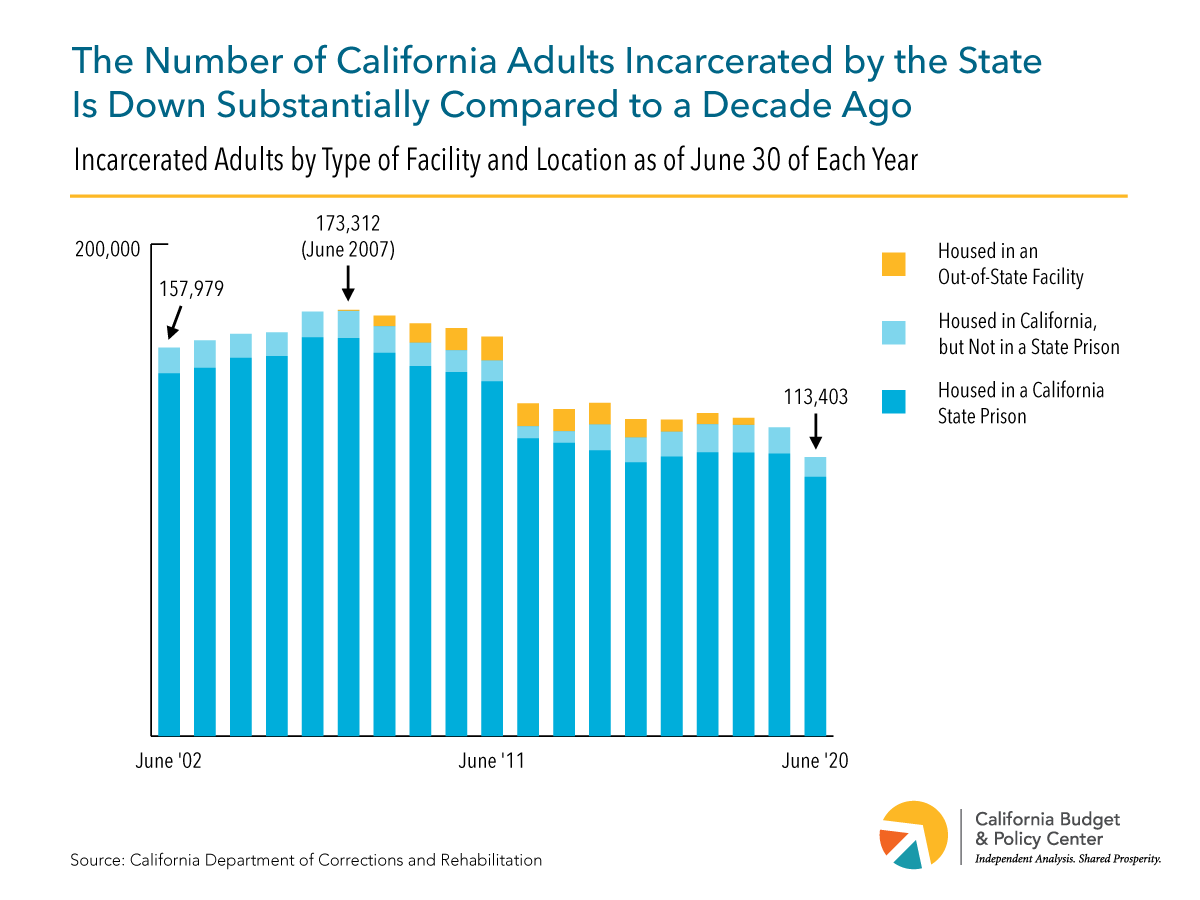 2. With Declining Incarceration, California Ended the Use of Out-of-State Prisons and Has the Opportunity to Begin Closing State-Owned Prisons

In 2006, California began transferring incarcerated adults to facilities in other states to help reduce overcrowding in state prisons. State policymakers adopted this approach even though “out-of-state private prisons create significant barriers to rehabilitation and humane conditions of care.”4 The number of Californians moved out of state peaked at more than 10,000 in the early 2010s. However, as incarceration declined, California was able to gradually reduce its reliance on facilities in other states before finally terminating its last out-of-state contract in June 2019. Moreover, due to the ongoing decline in the prison population, California is on track to soon end the use of all in-state contract facilities for men, and the recently enacted 2020-21 budget package envisions closing two state-owned prisons in the coming years.5 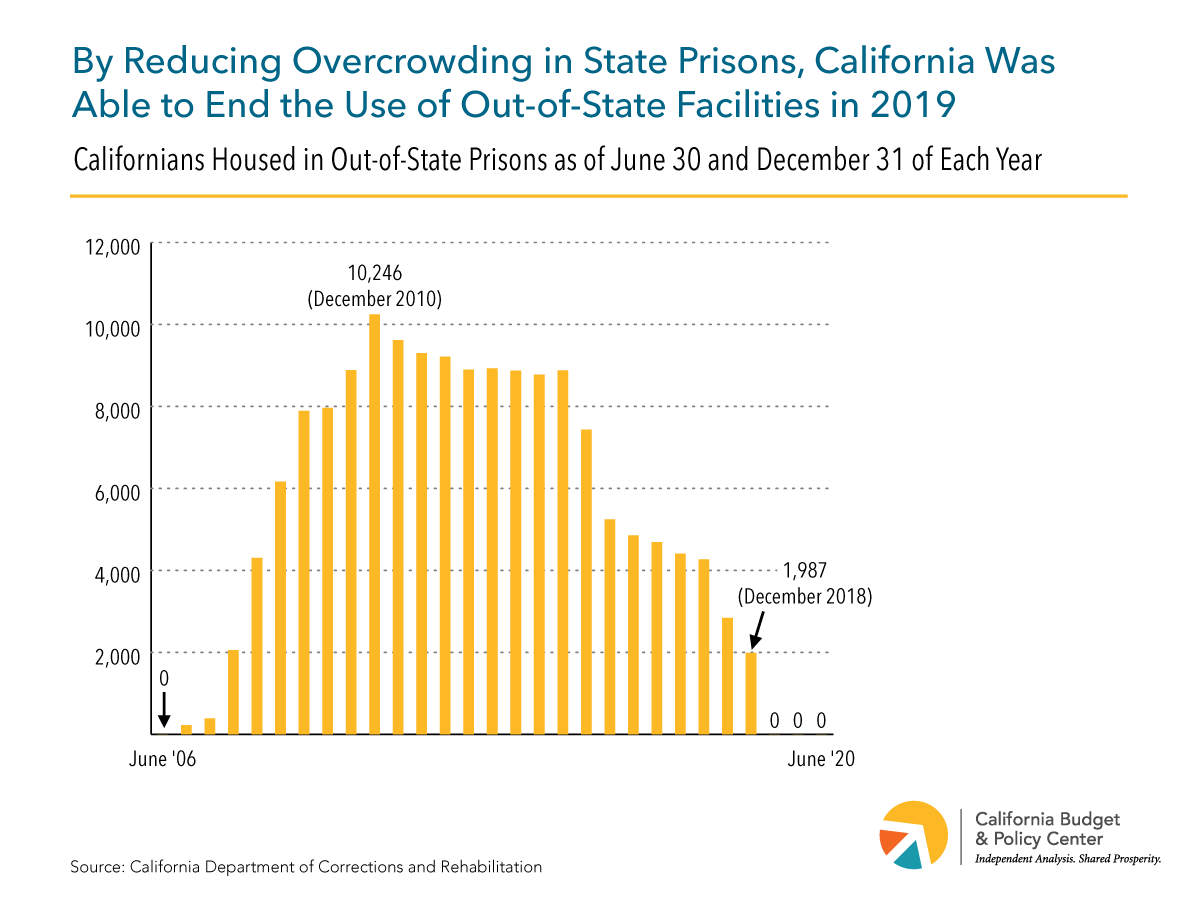 3. California’s Incarceration Rate for Adults Has Fallen to a Level Last Seen in the Very Early 1990s 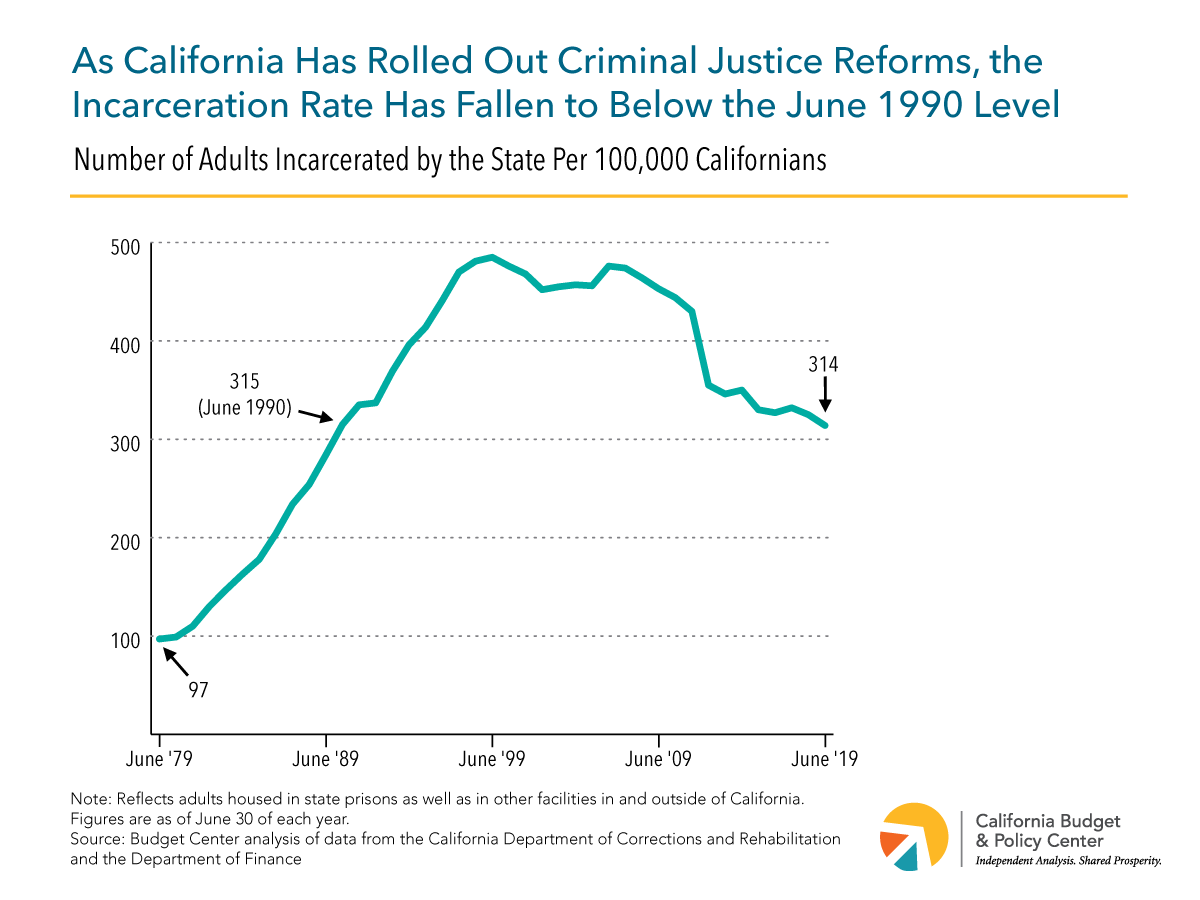 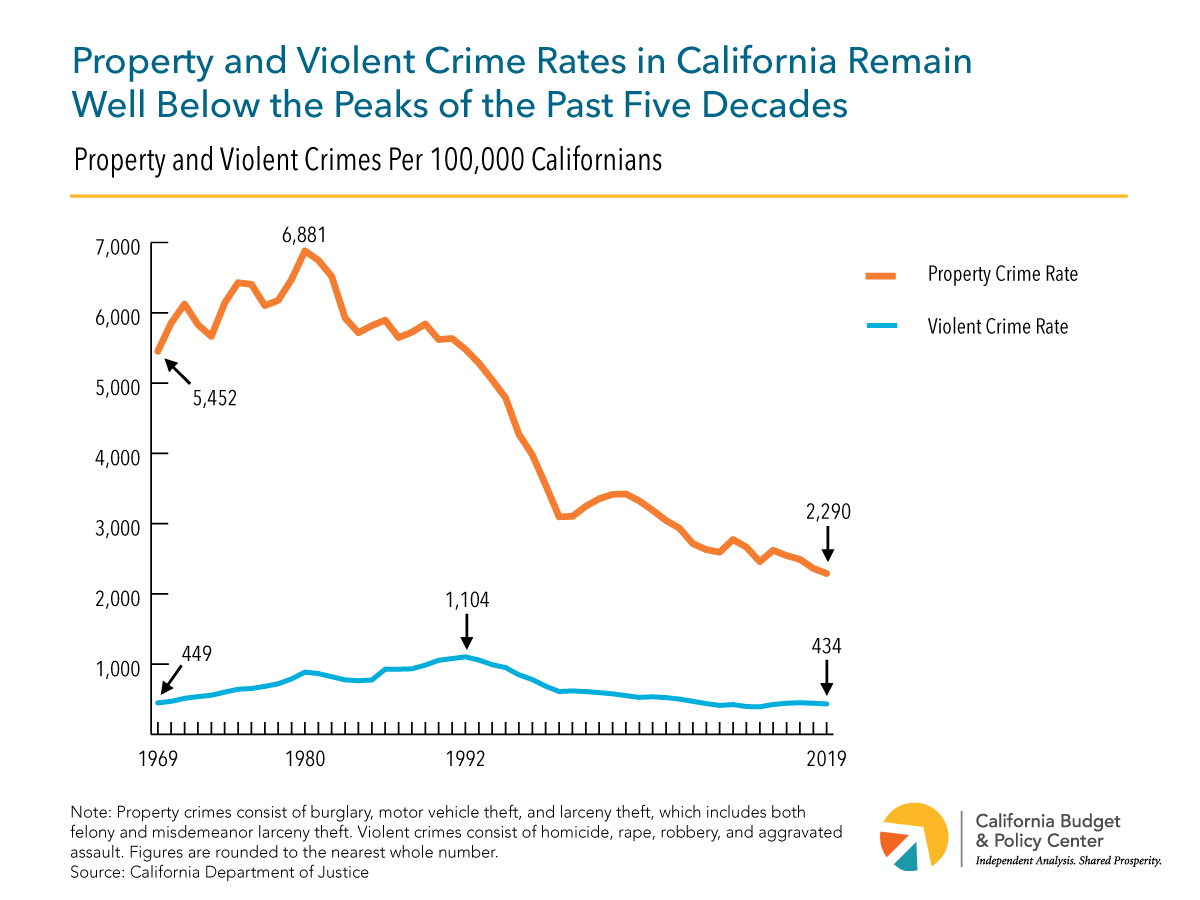 5. California’s Incarceration Rate and Crime Rates Are All Down Substantially Since the Mid-2000s

Incarceration and crime rates are all down substantially compared to their levels in 2006 – shortly before state policymakers and the voters began enacting reforms to California’s criminal justice system. As noted above, the incarceration rate of adults dropped by more than one-third (34%) from June 2006 – the recent peak – to June 2019. During approximately the same period (2006 to 2019), California’s property crime rate fell by more than one-quarter (28%) and its violent crime rate declined by nearly one-fifth (19%). These statistics contradict the common, yet unsubstantiated, claim that reducing mass incarceration will cause crime rates to spike. In fact, California’s experience and a large body of research highlight the weak link between incarceration and crime.7 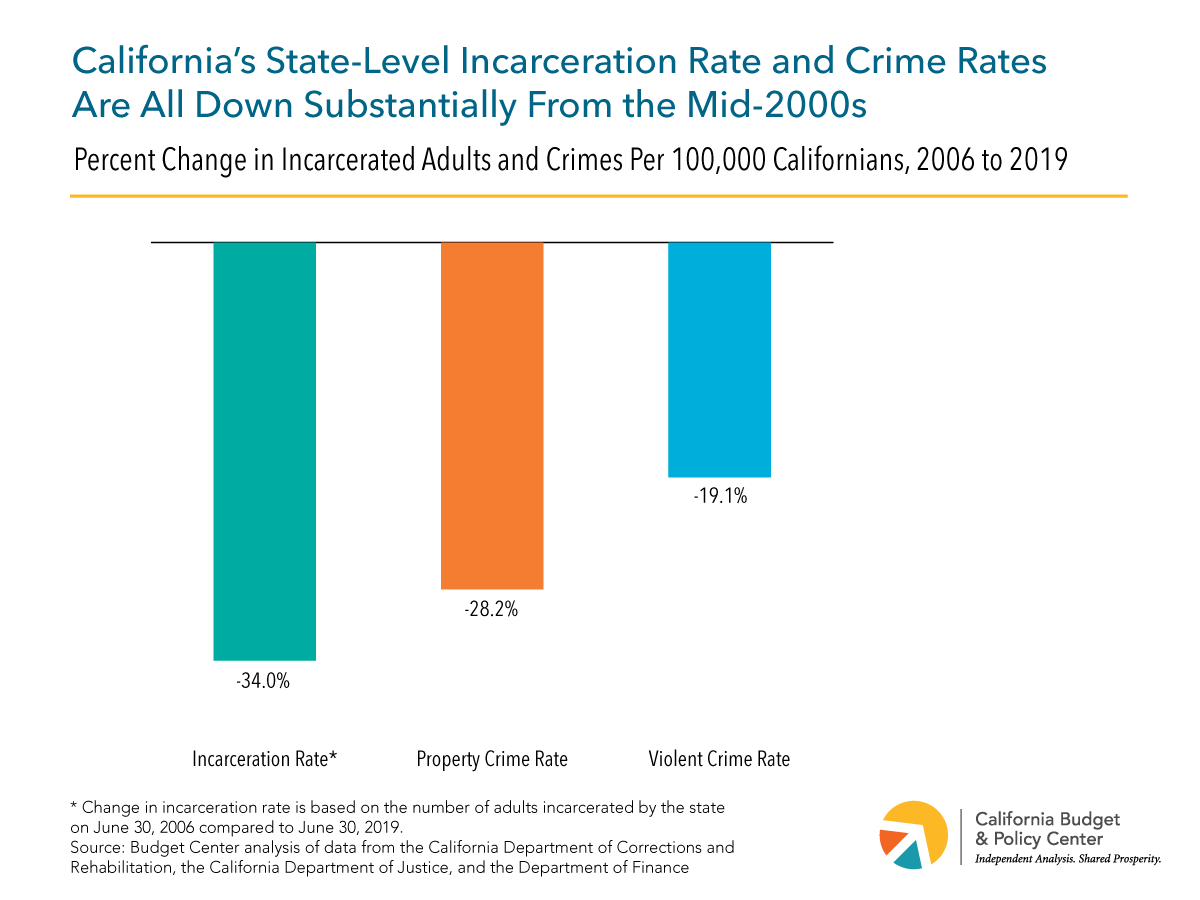 California’s experience with criminal justice reform provides further evidence that reducing mass incarceration of men and women can go hand-in-hand with lower crime rates. But California’s work is not done – policymakers can and should do more to decrease incarceration of Californians, particularly given the impact of the COVID-19 pandemic on incarcerated adults, prison staff, families, and surrounding communities. This is especially important for Black and Latinx men and women and their families, who are bearing the greatest burdens of COVID-19 in prisons and the broader community. In recent weeks, the state has been moving in the right direction: The prison population has fallen more rapidly than anticipated due to early releases and other policies advanced by Governor Newsom to slow the spread of the coronavirus behind prison walls. With these steps, the Governor has created an opportunity to plan for the closure of several state-owned prisons over the next several years – assuming, at a minimum, that current criminal justice reforms remain in place and that the state prison population does not again begin to rise.

Downsizing California’s costly prison infrastructure would allow the state to reduce the size of the corrections footprint on the state budget. This, in turn, would free up resources that could be used for reentry assistance and other services that can help to promote rehabilitation, reduce poverty, and strengthen families and communities – particularly Black and Latinx communities, which have been disproportionately impacted by the pandemic and the deep recession that it triggered as well as by generations of discrimination at the hands of the criminal justice system.

1 The US Supreme Court upheld this order in 2011. California has been in compliance with this order since February 2015. See California Department of Corrections and Rehabilitation, Three-Judge Court Monthly Update (July 2020).

3 CDCR’s in-custody population further declined to 103,169 as of August 12, 2020. This substantial ongoing decline reflects early releases and other policies adopted by the Newsom Administration that are intended to slow the spread of the coronavirus in state prisons.

6 Technical factors “related to crime classification and reporting” contributed to the slight – yet temporary – uptick in violent crime rates after 2014. Mia Bird, et al., The Impact of Proposition 47 on Crime and Recidivism (Public Policy Institute of California: June 2018).