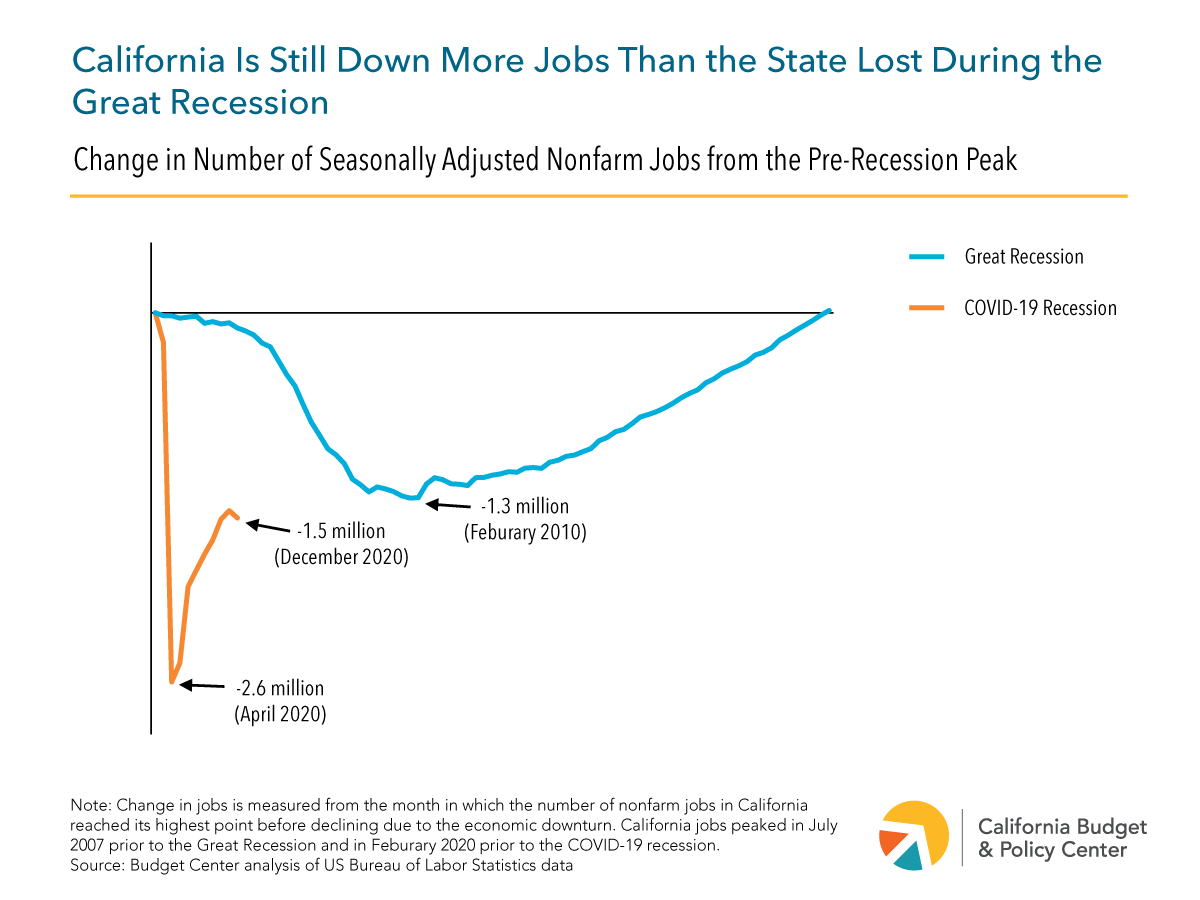 California is losing jobs again. As COVID-19 cases surged in late 2020 and new restrictions affecting businesses had to be put in place, California began to lose jobs again for the first time since the pandemic began. This deepened the massive hole in the state’s job market. In total, California had 1.5 million fewer jobs in December than in February 2020, the month before the COVID-19 recession began. As 2020 came to an end – and 10 months into the COVID-19 recession – California was still down more jobs than the state lost during the Great Recession. It’s unlikely that California’s job picture has improved much since December given that strict COVID-19 restrictions remained in place to address high COVID-19 case rates until late January. 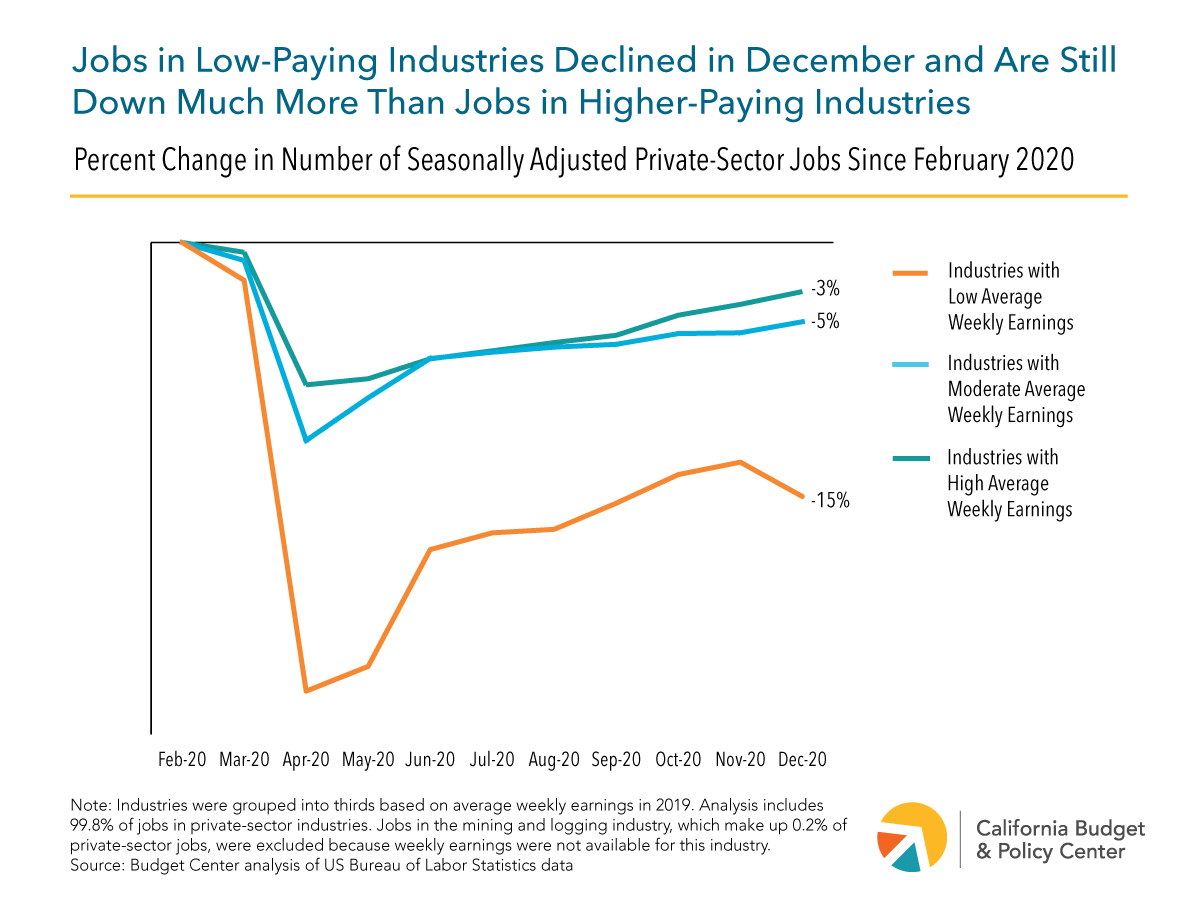 Low-paid workers continue to be hit hardest. Workers in California’s lowest-paying private-sector industries lost more than 100,000 jobs in December, while those in higher-paying industries gained jobs. Most layoffs occurred in the very low-paying leisure and hospitality industry, which largely includes jobs at restaurants. This new round of layoffs for California workers continued the uneven pattern of job losses that has occurred all throughout the recession. Low-paying industries still had 15% fewer jobs in December than in February, while moderate- and high-paying industries had just 5% and 3% fewer jobs, respectively. 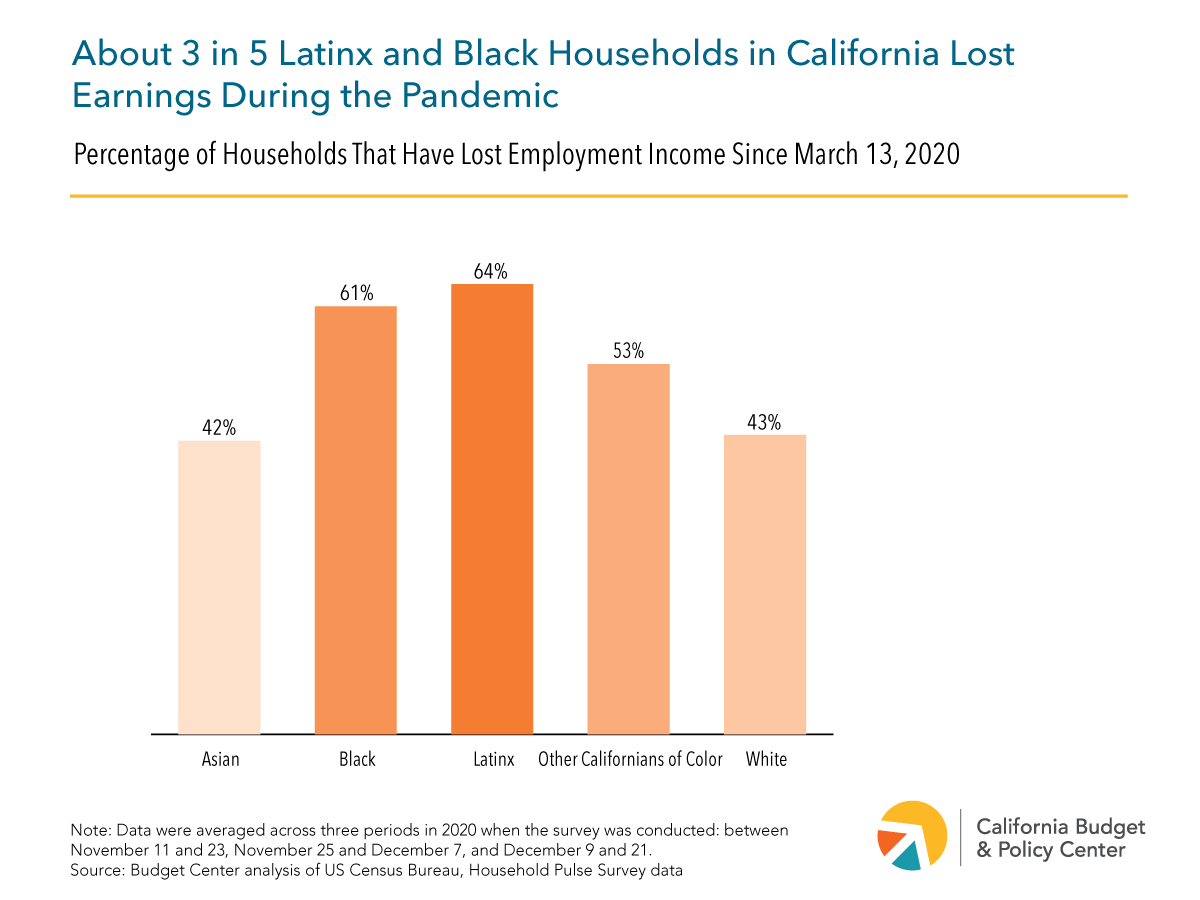 Layoffs during the pandemic have reduced the earnings of the majority of Black and brown households. About 3 in 5 Latinx and Black households in California lost earnings during the pandemic as of late 2020. In contrast, well under half of Asian and white households lost earnings. Although federal policymakers enhanced unemployment benefits and provided two rounds of economic relief payments last year, millions of Californians report difficulty paying for basic expenses like food in part because these benefits haven’t been enough to cover the cost of living. Additionally, benefits haven’t reached everyone in need, including undocumented Californians who are blocked from support by state and federal policies.

Many Californians – particularly Black and brown workers and those who are paid low wages – will continue to face economic and health challenges for some time. Although vaccines are available to start addressing the pandemic, it will take time to reach herd immunity – when most of the population is immune to COVID-19 – and economists predict it will take years for all of the workers displaced by the recession to find new jobs. Moreover, as COVID-19 business restrictions are lifted and people who have lost jobs return to work, workers’ health – and the health of their families and communities – could be compromised until they have access to the vaccines. People going back to jobs that put them at risk of contracting COVID-19 are largely Californians of color whose communities have already experienced higher rates of illness and death from the virus. These facts highlight the urgent need for federal and state policymakers to 1) provide more economic relief so that workers and their families can meet basic needs and 2) make long-term investments that promote health and economic security so that all Californians can thrive.