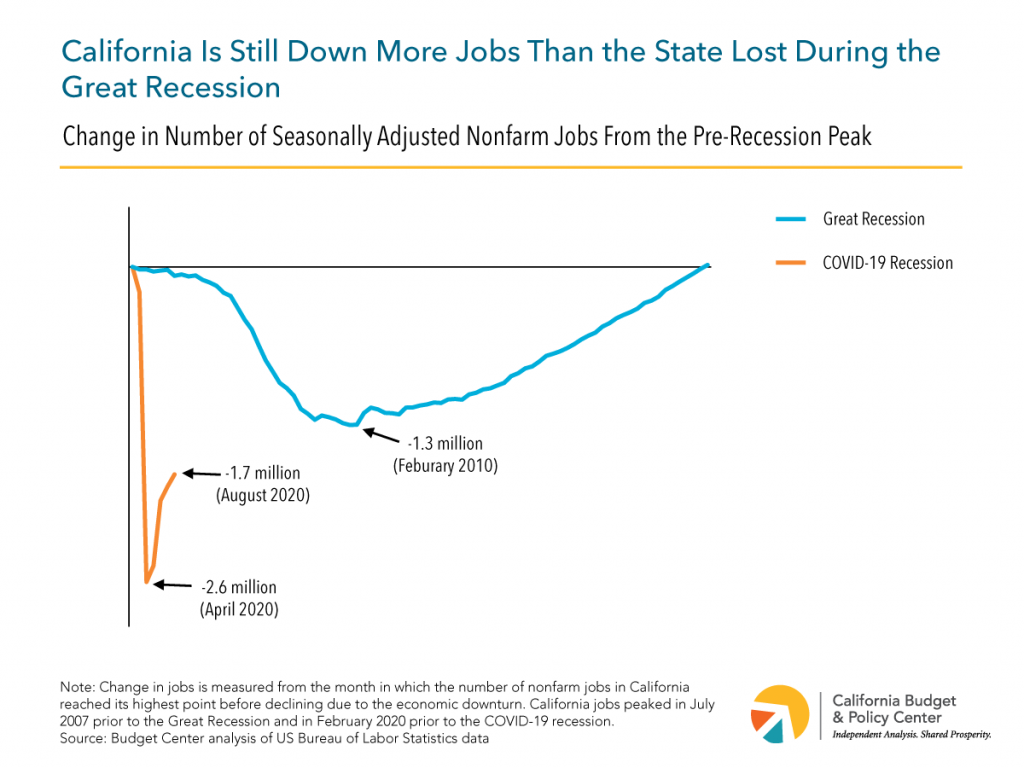 Millions of Californians are struggling to pay for basic necessities like housing and food amid the worst recession in recent history. California’s unemployment remains extremely high, particularly for Black and brown Californians. What’s more, the financial situation for many people has deteriorated as Congress has failed to extend additional federal unemployment benefits or provide any new economic relief that would significantly help children, families, and individuals who have lost income and cannot safely return to work. This report shows how California’s workers are faring six months into the COVID-19 recession and highlights the urgent need for federal and state policymakers to extend support to people and do more to respond to the economic crisis that is exacerbating health and financial disparities for Californians, especially Black and brown Californians. 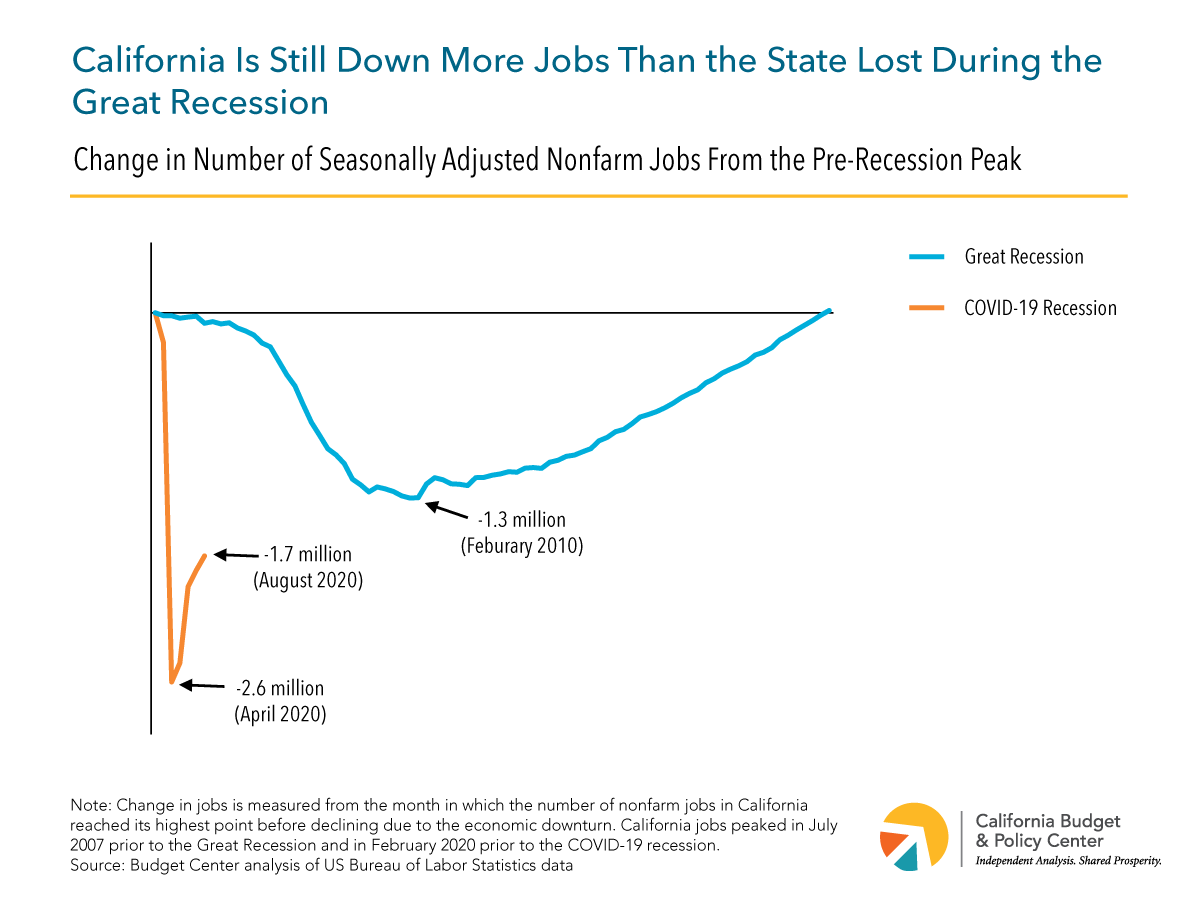 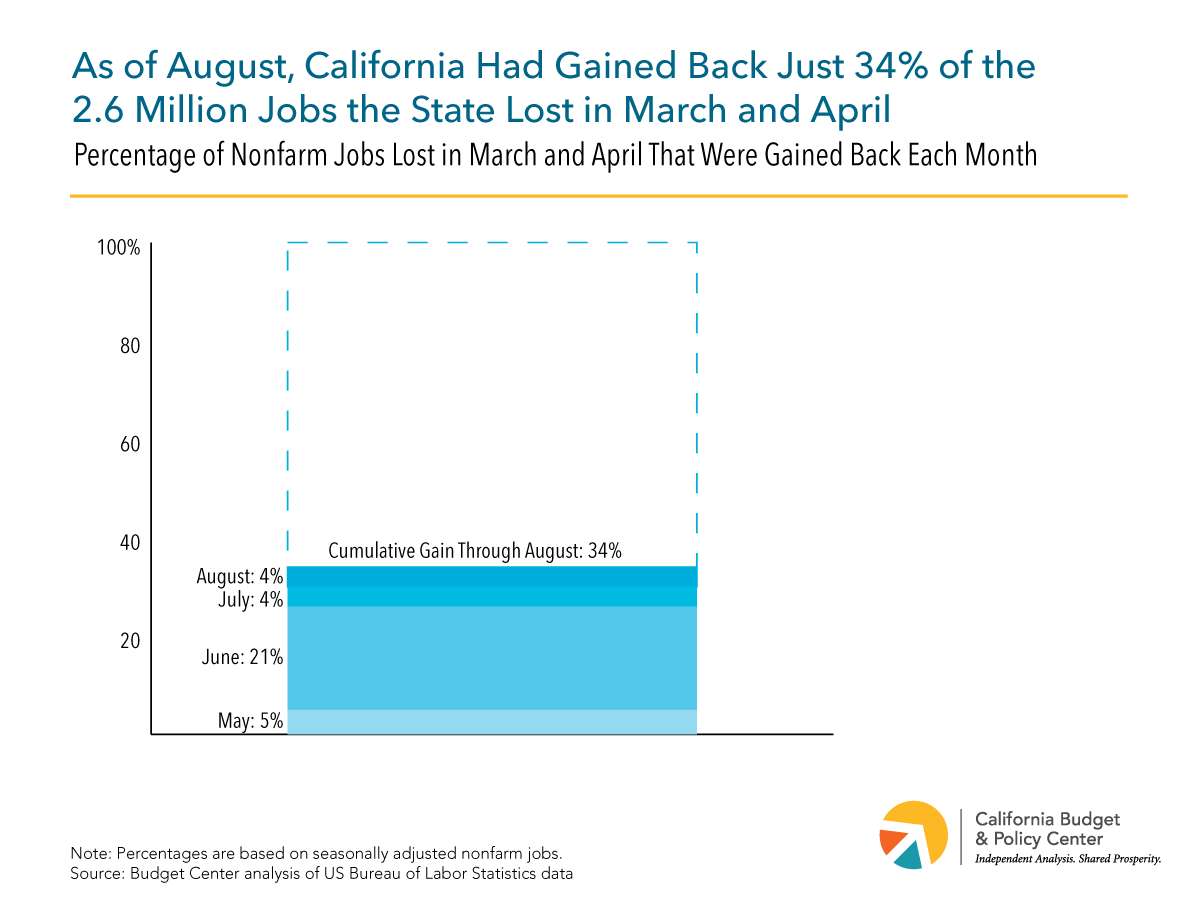 About two-thirds of the jobs California lost have not returned. As of August, California had gained back just 34% of the 2.6 million jobs the state lost this past spring. Most of these gains (21%) occurred in June as the state loosened restrictions on businesses that were put into place to slow the spread of COVID-19. In July and August, however, job gains slowed dramatically as California reimposed business restrictions to respond to spiking virus cases. In fact, a sizable share of jobs added in August were temporary positions related to the decennial US Census that will end when the Census count wraps up this fall. In other words, without these temporary jobs, August gains would have been much weaker. 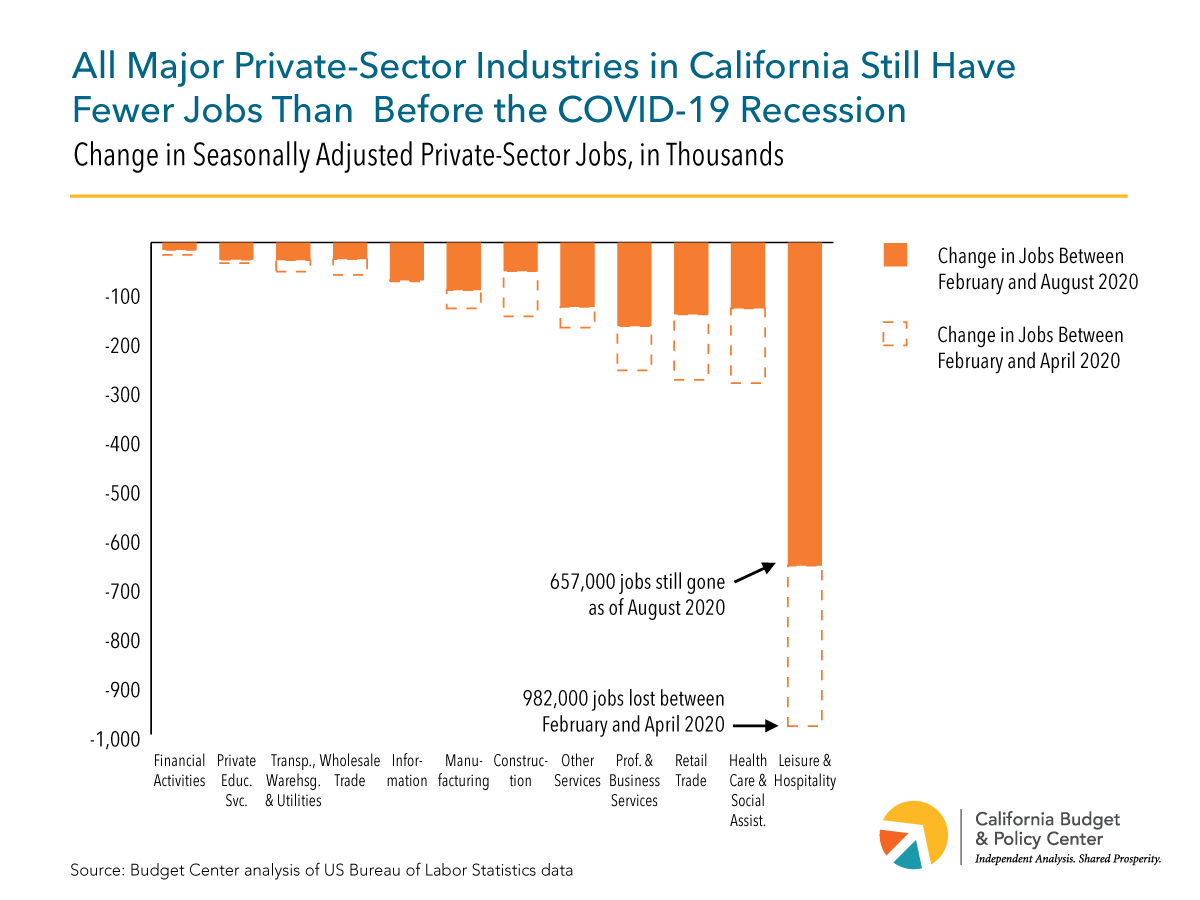 All major private-sector industries in California still have fewer jobs than before the COVID-19 recession began. The leisure and hospitality industry, which includes jobs at restaurants, hotels, and entertainment venues, remains the hardest hit industry. As of August, this industry was still down 657,000 jobs, meaning that about two-thirds of the 982,000 jobs the industry lost between February and April were still gone. In fact, this industry, together with the “other” services industry, which includes face-to-face personal care jobs, began to lay workers off again in August. This likely reflects the fact that California reimposed restrictions affecting many businesses in these industries in early July amid rising COVID-19 cases. 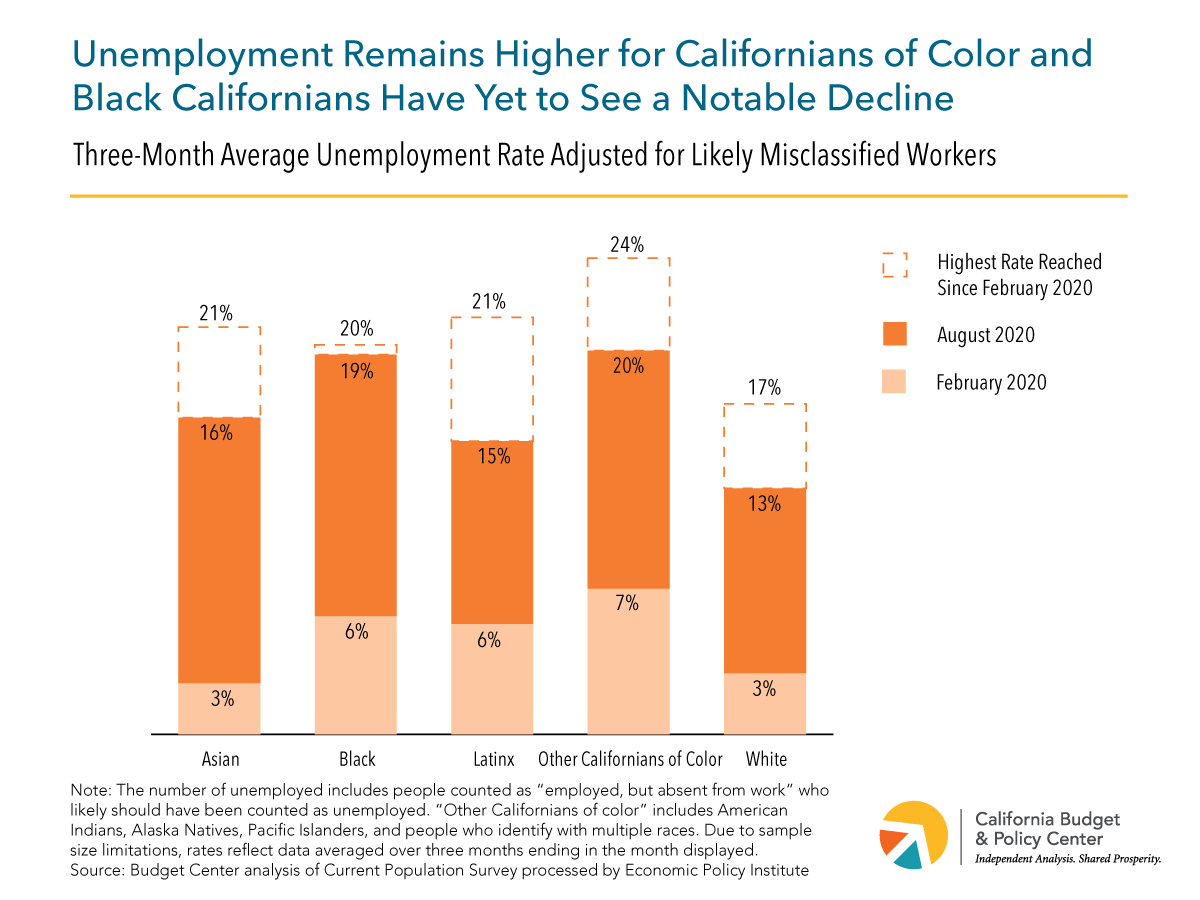 The unemployment rates presented in this report were adjusted to account for people the Bureau of Labor Statistics suspects were misclassified as employed but absent from work who actually were unemployed. For more information, see the technical note at the end of this report. 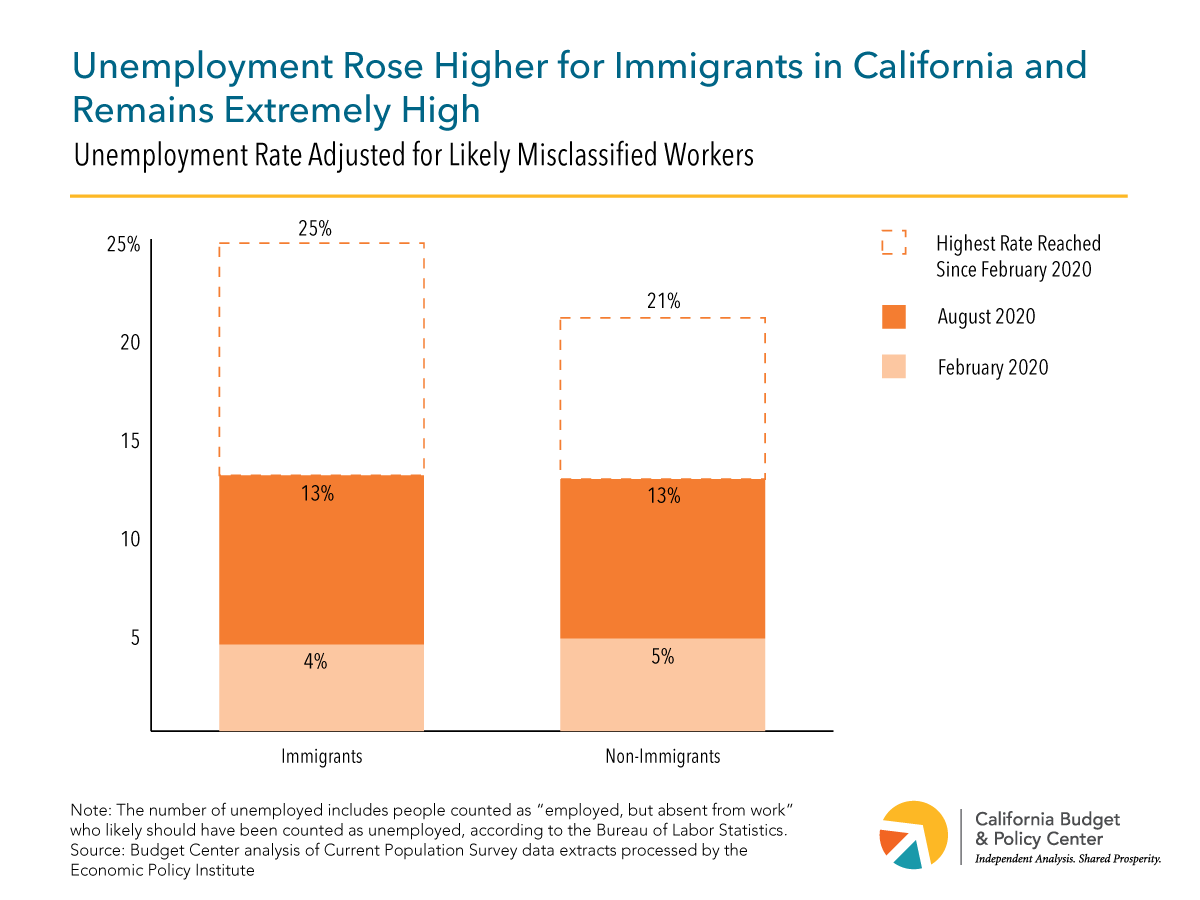 Six months into the COVID-19 recession, California is still down 1.7 million jobs and California’s workers continue to face extremely high unemployment rates. These facts point to the urgent need for federal and state policymakers to do more to address both the public health and economic crisis. Failing to do so will pile onto the hits to Black and brown Californians and be yet another policy choice that exacerbates longstanding racial, ethnic, and gender disparities. Lawmakers can alleviate the economic pain millions of Californians are feeling and prevent those pains from hardening into deep scars with a combination of policies at the federal and state level.

California policymakers should continue to fill in where federal economic relief policies fall short. One of the most glaring shortcomings of federal policymakers’ response to the COVID-19 recession is that economic relief measures excluded undocumented immigrants and their families, diminishing the economic security of millions of Californians. State leaders could help to reduce this harm by:

The Bureau of Labor Statistics (BLS) believes that during the COVID-19 recession a large number of workers who reported being employed but absent from work were in fact on temporary layoff and should have been counted as unemployed. Each month since March, the BLS has estimated how many workers may have been misclassified in this way and has reported what the national unemployment rate would have been had these workers been counted as unemployed. This analysis follows the BLS methodology for identifying potentially misclassified workers, which is described here, and adds these workers to the number of unemployed in order to calculate adjusted unemployment rates. These rates should be more accurate than rates calculated with no adjustments.

Nevertheless, these adjusted unemployment rates may still understate unemployment for a different reason. To be counted as unemployed, workers must have made specific efforts to find employment in the past four weeks. If they did not, then they are counted as not in the labor force even if they want to work. This means that they are not included in the unemployment rate. However, it’s likely that many workers who lost their jobs during the COVID-19 recession did not search for work even if they wanted a job, particularly at the beginning of the recession when state-mandated business closures meant that there were far fewer jobs available. Moreover, California temporarily waived the requirement that unemployed workers search for jobs each week in order to receive unemployment benefits, reducing the incentive for workers to search for new jobs. Some economists have published adjusted unemployment rates that are likely more accurate because they reclassify some individuals who recently dropped out of the labor force as unemployed. This analysis, however, does not attempt to correct for this problem, which means that actual unemployment rates for Californians may be higher than what is presented in this report.