May 2022 | By Kayla Kitson and Adriana Ramos-Yamamoto 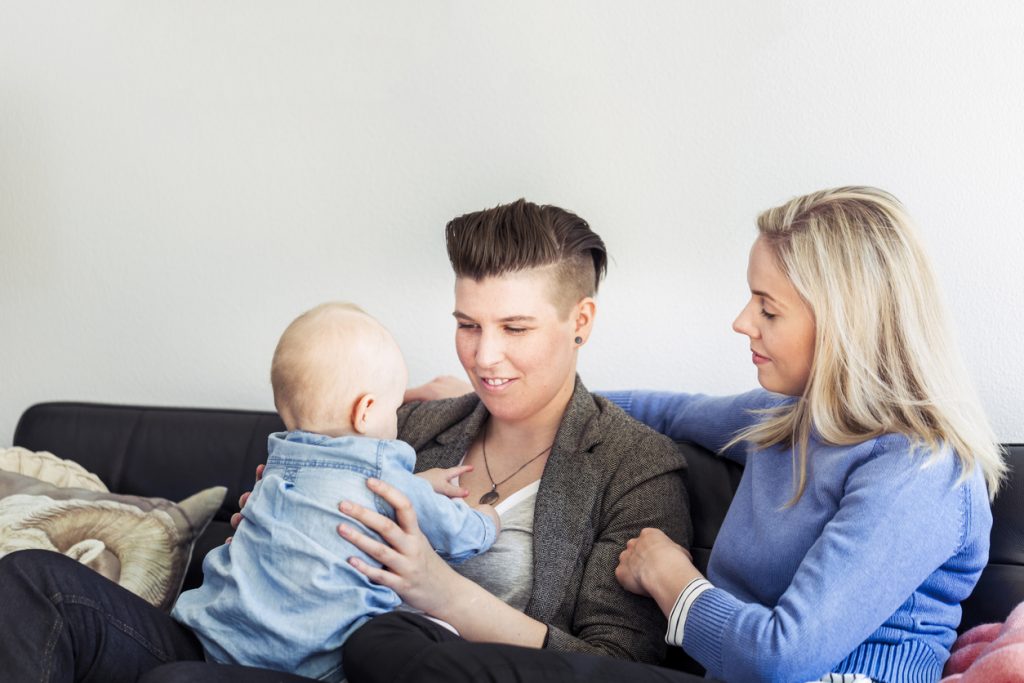 Mental health is an essential part of overall health and well-being for Californians no matter one’s age, zip code, gender identity, or sexual orientation. Everyone should have the opportunity to be healthy and thrive, yet LGBTQ+ people disproportionately experience mental health challenges compared to non-LGBTQ+ people.1The acronym “LGBTQ+” is a collective acronym for lesbian, gay, bisexual, transgender, queer or questioning, and other sexual and gender identities. The addition of the “+” indicates inclusion of other identities not encompassed by “LGBTQ,” including but not limited to those who identify as intersex, nonbinary, and asexual. For more information about terminology used in this report, see GLAAD Media Reference Guide, https://www.glaad.org/reference/terms. This was true even before the pandemic, when many Californians experienced stress, grief, isolation, depression, and other hardships.

Many LGBTQ+ Californians Reported Poor Mental Health During the Pandemic

Over the past several months, LGBTQ+ Californians have experienced more mental health hardship than cisgender and straight Californians, according to data from the US Census Bureau Household Pulse Survey collected between July 2021 and March 2022.2A cisgender person is a person whose gender identity aligns with the sex they were assigned at birth. Data reflect the period between July 21, 2021 and March 14, 2022. While the US Census Bureau began administering the Household Pulse Survey in April 2020, it only began including questions about sexual orientation and gender identity in July 2021. Overall, about half of LGBTQ+ Californians reported poor mental health during the pandemic, which is defined as symptoms of depression, anxiety, or both. Mental health hardship was particularly pronounced among transgender Californians, with about two-thirds experiencing symptoms of poor mental health. In addition, about 6 in 10 bisexual Californians and more than 4 in 10 gay or lesbian Californians experienced poor mental health, compared to less than one-third of straight Californians.

The Household Pulse Survey includes relatively detailed information on gender identity and sexual orientation, which is significant because US Census Bureau surveys generally fail to capture this information, making it impossible to compare outcomes between LGBTQ+ and non-LGBTQ+ communities. However, the Household Pulse Survey data still do not fully reflect the complexity, nuance, and full spectrum of identities.

Many LGBTQ+ Californians Did Not Receive Mental Health Care When Needed

More than 1 in 5 LGBTQ+ Californians reported that they needed mental health services but did not receive them, compared to about 1 in 10 straight, cisgender people. LGBTQ+ people have unique barriers in accessing care, such as discrimination or fears of discrimination as well as a lack of competent providers and gender-affirming care.3Susan H. Babey et al., Gaps in Health Care Access and Health Insurance Among LGBT Populations in California (UCLA Center for Health Policy Research, February 2022) https://healthpolicy.ucla.edu/publications/Documents/PDF/2022/Health-Care-Access-Insurance-LGBT-policybrief-feb2022.pdf. See also Jennifer Kates et el., Health and Access to Care and Coverage for Lesbian, Gay, Bisexual, and Transgender (LGBT) Individuals in the U.S. (Kaiser Family Foundation, May 3, 2018) https://www.kff.org/racial-equity-and-health-policy/issue-brief/health-and-access-to-care-and-coverage-for-lesbian-gay-bisexual-and-transgender-individuals-in-the-u-s/. For example, providers may refuse to use the names and pronouns that correspond with an individual’s gender identity, question an individual’s stated sexual orientation, or fail to acknowledge someone’s relationship as legitimate.4Rory P. O’Brien et al., Mapping the Road to Equity: The Annual State of LGBTQ Communities (#Out4MentalHealth Project, 2018), 70-82, https://californialgbtqhealth.org/wp-content/uploads/2018/12/O4MH-Mapping-the-Road-to-Equity.pdf.

LGBTQ+ People Face Multiple Stressors That Are Harmful to Health

Even before the pandemic, Californians who reported their gender as transgender or gender nonconforming as well as those who identified as gay, lesbian, or bisexual were much more likely to report serious psychological distress compared to cisgender and straight Californians, respectively.5Serious psychological distress is an estimate of adults who have serious, diagnosable mental health disorders that warrant mental health treatment. See D. Imelda Padilla-Frausto et al., Serious Psychological Distress on the Rise Among Adults in California (UCLA Center for Health Policy Research, September 2020), 4-5, https://healthpolicy.ucla.edu/publications/Documents/PDF/2020/SPD-policybrief-sep2020.pdf. Experiences with discrimination, family or social rejection, and internalized oppression that many LGBTQ+ people face likely contribute to these higher rates of distress. For example, in a nationally representative sample of adults, including 489 adults identifying as LGBTQ, more than half of the LGBTQ respondents reported having experienced or having a LGBTQ friend or family member who had experienced personal discrimination such as slurs, harassment, violence, or threats of violence.6Harvard T.H. Chan School of Public Health, Robert Wood Johnson Foundation, and National Public Radio, Discrimination in America: Experiences and Views of LGBTQ Americans (November 2017), 1, https://cdn1.sph.harvard.edu/wp-content/uploads/sites/94/2017/11/NPR-RWJF-HSPH-Discrimination-LGBTQ-Final-Report.pdf. For more background on the factors that may contribute to higher rates of mental health challenges for specific LGBTQ+ populations, including LGBTQ+ people of color, see Pasha Mikalson Walker et al., Surveying the Road to Equity: The Annual State of LGBTQ Communities (#Out4MentalHealth Project, 2019), https://californialgbtqhealth.org/wp-content/uploads/2020/11/Surveying-the-Road-to-Equity-2019-State-of-LGBTQ-Communities-Report.pdf. About 1 in 5 reported having experienced discrimination in employment or housing.7Discrimination in America.

In addition to creating psychological distress, discrimination faced by LGBTQ+ individuals may lead to economic challenges such as poverty and homelessness, putting them at further risk of experiencing poor mental health outcomes. Between July 2021 and October 2021, people who identify as LGBT nationally were more likely to report difficulty paying for household expenses, such as food, rent, mortgage, and car payments than non-LGBT people, according to a report from the Williams Institute.8Kerith J. Conron et al., Food Insufficiency Among LGBT Adults During the COVID-19 Pandemic (The Williams Institute, April 2022), 4, https://williamsinstitute.law.ucla.edu/wp-content/uploads/LGBT-Food-Insufficiency-Apr-2022.pdf.

LGBTQ+ people with low incomes must navigate multiple and compounding stressors related to their economic situation as well as their gender identity and/or sexual orientation, which can be especially harmful to their mental health.

State policymakers should address the unique needs of LGBTQ+ Californians as they work to increase access to mental health services and bolster the state’s mental health workforce. For instance, state leaders can promote LGBTQ+-affirming training for behavioral health providers to better serve Californians receiving health services through Medi-Cal, as some advocates have proposed. Policymakers can also invest in efforts to make sure that the behavioral health workforce better reflects the diversity of all Californians, including their gender identities and sexual orientations.

Information About the US Census Bureau Household Pulse Survey Data:

The US Census Bureau Household Pulse Survey measures how the COVID-19 pandemic has impacted households across the country from a social and economic perspective. In July 2021, the survey began collecting information on current gender identity, sex assigned at birth, and sexual orientation. For the gender identity dimension, the possible responses are 1) male, 2) female, 3) transgender, and 4) none of these. The possible responses for the sexual orientation question are 1) gay or lesbian, 2) straight, that is not gay or lesbian, 3) bisexual, 4) something else, and 5) I don’t know.

Data Displayed in this Report:

This report does not display results for respondents who selected “none of these” on the gender identity question or those who selected “something else” or “I don’t know” to the sexual orientation question — unless the respondents were categorized as gay or lesbian, bisexual, or transgender based on other survey responses. Previous research suggests that people selecting these options may or may not identify as LGBTQ+.11Conron et al., Food Insufficiency, 17. Given the inconclusiveness of these data, it may not be appropriate to assume that people selecting these responses are LGBTQ+. However, excluding these responses means that the data do not fully represent the experiences of some groups of LGBTQ+ Californians. These groups include but are not limited to: those who identify as nonbinary, genderqueer, gender fluid, two-spirit, or another gender identity; those identifying as pansexual, asexual, or another sexual orientation; and those questioning their sexual orientation or gender identity.

In order to better understand the experiences and needs of various LGBTQ+ populations, it is crucial that future federal, state, local, and nongovernmental surveys both include questions about gender identity and sexual orientation and also refine these questions to more accurately reflect the diversity of LGBTQ+ communities. Policymakers can advance health and economic equity for LGBTQ+ individuals by ensuring that publicly funded data efforts include comprehensive and inclusive information about gender identities and sexual orientations.