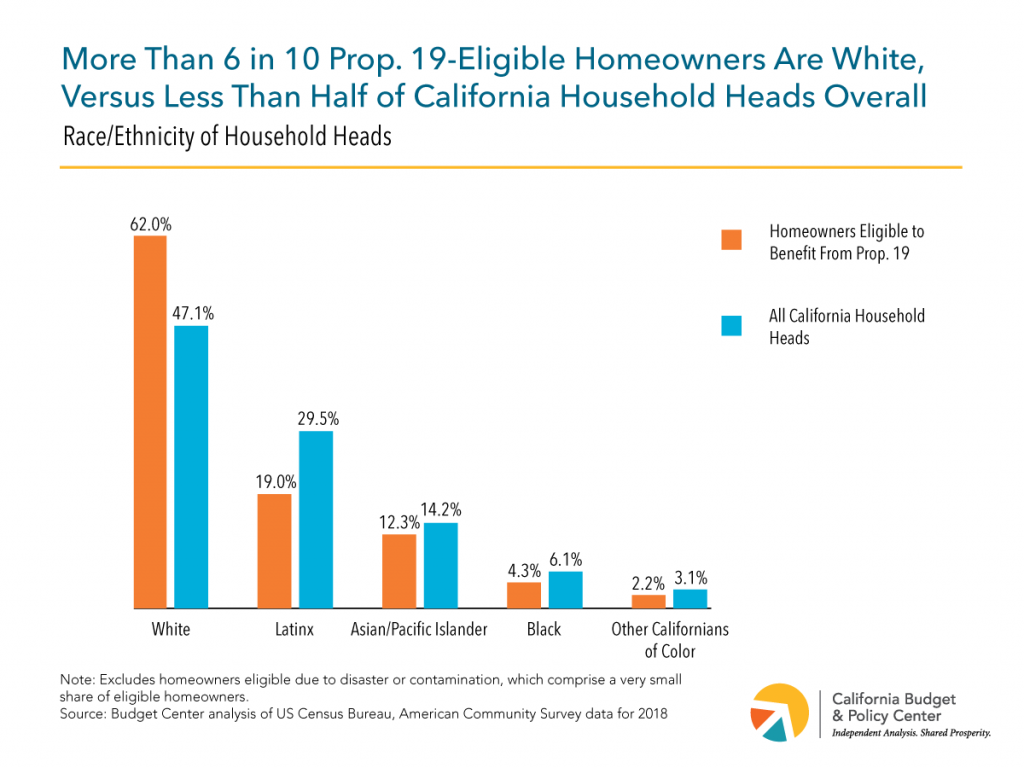 As one of the most complicated measures on the November 2020 state ballot, Proposition 19 would make significant changes to California’s residential property tax system. The proposition would expand a property tax loophole for older, mostly wealthier homeowners, while covering the cost by narrowing another special tax rule for inherited properties – and would then require state and local governments to track how much their tax revenues change as a result, requiring new administrative infrastructure. Altogether Prop. 19 would likely result in increased state and local revenues on net – but not for all counties – while most of the newly available state dollars would be restricted to a new special fund limited to use for supporting fire response. Prop. 19 includes some elements that policymakers could consider as part of more comprehensive tax reform, but its central proposal to expand tax breaks for older, mostly white, mostly economically advantaged homeowners would make California’s tax system less equitable. The complicated proposal would also do little or nothing to help the Californians most severely affected by the state’s housing affordability crisis, including renters, families with low incomes, and most Black and Latinx residents. This proposition was initiated by the California Association of Realtors and modified in negotiations with the Legislature.

California already has special rules that allow homeowners who are age 55 or older or who are severely disabled to avoid paying higher property taxes if they sell their home and move to a new home under certain circumstances – and Prop. 19 would expand the special tax breaks for these same homeowners. About 4 million homeowners age 55 or older would be eligible to benefit from these new property tax breaks under Prop. 19, as well as a much smaller number of younger homeowners with disabilities, according to Budget Center analysis. Similar existing special rules apply to individuals whose homes have been damaged or destroyed by fire or other natural disasters, and these tax breaks would also be expanded, though homeowners affected by disasters who are not also eligible due to age or disability make up a tiny share – well under 1% – of the total number of homeowners eligible to benefit from Prop. 19, according to Budget Center analysis.

Generally, the homeowners who would be eligible to benefit from these new special property tax breaks under Proposition 19: 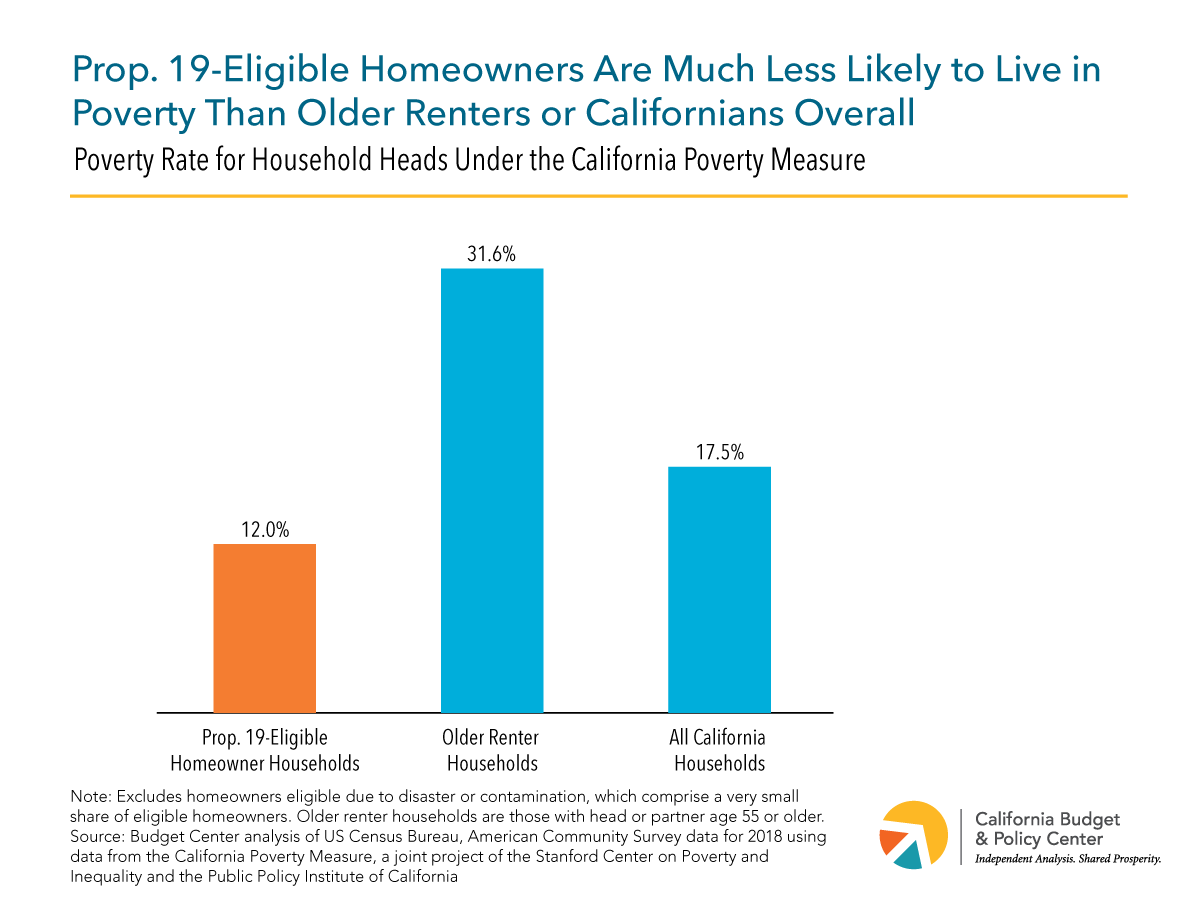 Prop. 19-eligible homeowners are also substantially more likely to be white and much less likely to be Latinx or Black than the heads of California households overall, according to Budget Center analyses. Housing policy and tax policy have historically benefited white households most, including through policies with explicitly racist design and implementation that have blocked Black and brown Californians from homeownership opportunities. By directing additional tax benefits largely to white homeowners, Prop. 19 reinforces racial inequity within California’s tax system. 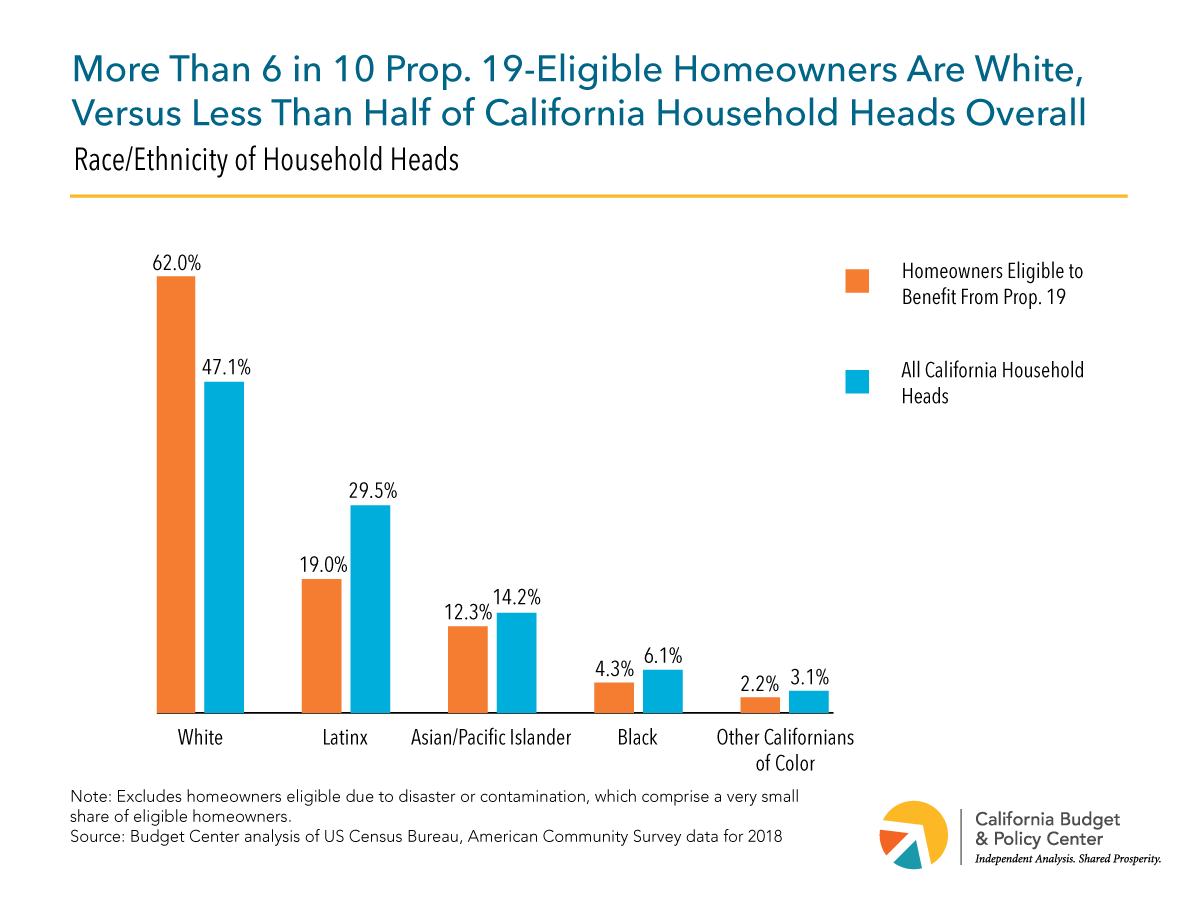 Prop. 19 Would Attempt to Pay for Expanding One Property Tax Break By Limiting Another – California’s Property Tax Inheritance Loophole

Prop. 19 would narrow California’s property tax inheritance loophole, which offers Californians who inherit certain properties a significant tax break by allowing them to pay property taxes based on the property’s value when it was originally purchased rather than its value upon inheritance. As outlined in an analysis by the Legislative Analyst’s Office (LAO), this loophole is costly, inequitable, and may exacerbate the state’s housing crisis. And since wealthy, white individuals are more likely to receive inheritances, this loophole likely exacerbates the racial wealth gap.

Prop. 19 would narrow California’s inheritance loophole by 1) requiring the inherited property be used as the child’s primary residence or as a family farm to qualify for the tax break and 2) limiting the tax savings for properties where the market value is at least $1 million higher than the taxable value prior to the transfer. These changes would lessen the inequities in California’s current property tax system and raise property tax revenue to support local services, but a more sound and less complicated policy would be to limit the inheritance loophole without linking it to the expansion of another inequitable tax break.

Prop. 19 Would Result in a Net Increase in Local and State Tax Revenues, While Narrowly Restricting Most State Revenue Gains to Use for Fire Response

The property tax changes proposed in Prop. 19 would likely raise local property tax revenues to support community services, but these gains are limited by the expansion of the special rules for certain homeowners and would vary significantly by county and year. Some counties may lose revenue in some years, though the measure would require that local agencies be at least partially reimbursed for the losses. In some years, most school districts would see no net gains in funding, as state funding for education would decrease to offset the property tax revenue gains.

The measure is also expected to result in some increased income tax revenue to the state due to increased home sales, as well as state budget savings due to a reduction in the state’s share of education funding under the Proposition 98 minimum funding guarantee. The majority of this additional revenue and savings – 75% of the net gains – would be earmarked for state and local fire suppression activities. While the state clearly has an urgent need for fire response resources, restricting funds to specific purposes compromises the state’s flexibility and ability to respond to changing circumstances.

As California seeks to make equitable policy choices and advance budget decisions for people and their communities, the state cannot achieve those goals with complex schemes that needlessly combine efforts to increase state and local revenues – to address critical community needs – with substantial tax breaks for mostly wealthier California homeowners. A more just approach to reforming California’s tax system would keep the elements of Prop. 19 that increase revenues equitably without linking this change to expanded benefits for individuals who mostly have little need for additional tax cuts. A more effective policy design would also allow more flexible use of increased revenues – which could allow the opportunity to use funds to address the needs of Californians most affected by the state’s housing affordability crisis, such as those who rent their homes, those with lower incomes, and Black and brown Californians who have been blocked from homeownership opportunities and hit hardest by unaffordable housing costs. Overall, Prop. 19’s tax break giveaways and complexity limit its potential to make the state’s tax system more equitable and to effectively address Californians’ most urgent needs.